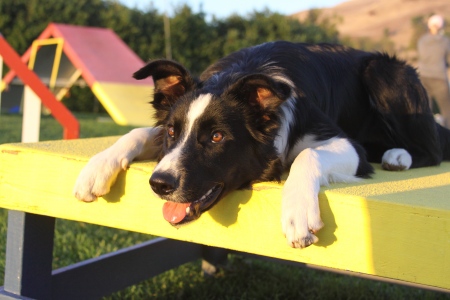 Time flies! Can’t believe it has been 6 weeks since I wrote about Scoop. I was away from home 30 out of the last 50 days. On a handful of those days Scoop was with me at agility trials. The big adventure was the trip to Europe and the World Championships for two weeks, which was immediately followed by a trip to Colorado for a week and then Portland  for three days. I am glad to be home, and have been enjoying every training moment with Scoop. 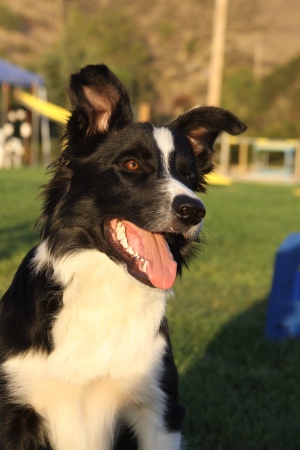 Luckily even though my blog has been suspended in time, Scoop’s training has not suffered the same fate. He looks and acts sort of grown up! He was 7 months old yesterday. He weighs 35 pounds and is over 20 inches tall. And really, really good news, no more tape and glue on his ears:) 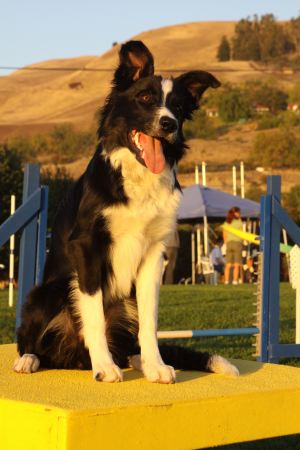 Scoop seems quite mature now until I take him into a way too stimulating environment .  At home he is silly and playful, but will train attentively for a very long time. He has a lot of control… unless I am trying to demonstrate a specific agility move with someone else’s dog during a very serious dog agility lesson. Then he might be naughty enough to warrant being taken back to the house rather than get to hang with me in the field while I teach. At agility trials like one I went to today, as long as he is on his toy or I am actively reinforcing him with food for behaviors he is really great and attentive. His biggest distraction right now is greeting people. He wants to visit with everyone, and truthfully that also means jump on them. Short leashes, lots of rewards helps, but the issue is ongoing. I think I will ask for some help from friends tomorrow, to see if I can get in some reinforcements for sitting before he gets a chance to jump up to greet everyone.

We play and train as often as possible. That means we spend individual time together at minimum a few times a day when we are together. He hangs with me in my office when I am working indoors, and if I have a break that doesn’t include training him, he likes to cuddle on my lap. Well, sort of on my lap; those legs dangle off to the side cuz they are so long. I really like his willingness to settle down and cuddle. Mostly my dogs aren’t that fond of cuddling. Well Jack and Panic would sleep under the covers and crawl under my skin so to speak, but Wicked , Riot and Ace count the dog minutes on their toes, hoping I will let them off the couch, out of my arms, and onto their dog bed on the floor where they can act very non cuddly. Riot at 14 still wants to be right next to me all day, but cuddling is out of the question. She is too cool for that. 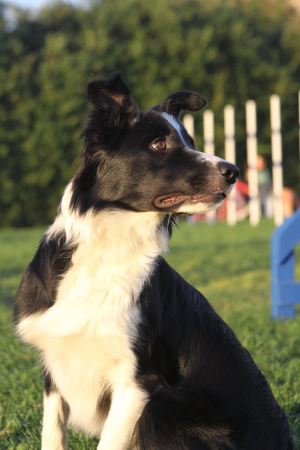 Scoop will drop his head flat to the ground and hold it there on the drop command. Since he also knows feet means to put your front feet in my hand, or up on a table or chair, I can now combine those two cues to make some fun tricks. Feet on the chair from the sit position, and then head down can be say your prayers. Feet in my hand, and head dropped low between his legs is sort of exaggerated praying while stretching. His body looks sort of weird on that one, so we don’t do it too much. He will also walk with me on his hind legs while his front feet are in my hand. That is another trick we do only once in a while since he is standing on his hind legs while doing it. I think the moral of the story is that anything that is much of an athletic feat is trained but practiced minimally while he is still all legs and growing like a weed. 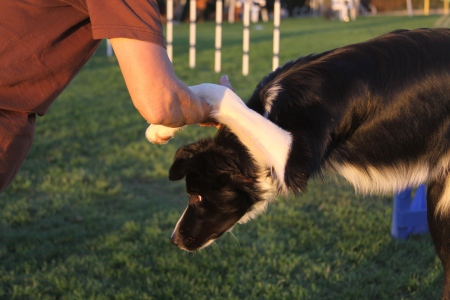 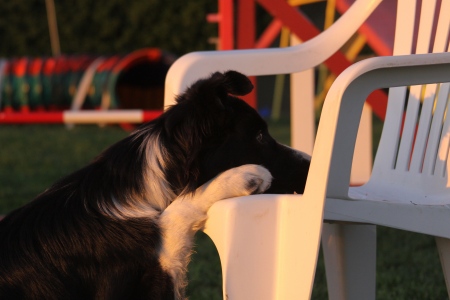 Scoop now takes some steps backwards on cue. I use the command walk. I shaped it like this. I sat in a chair and waited for him to move one foot, then I clicked and gave him the treat. I watched his feet and waited for the movement again, then clicked. As soon as he started to understand that he was reinforced for taking a step backwards, I upped the ante and only clicked after he moved one foot and then the other, so I went from marking one step back, to marking two steps back. I decided to reinforce the beginning steps of walk by him returning to me for his reinforcement cookie. That way he was already reset to move away from me again. There are different ways to reinforce walking backwards and to pinpoint where the dog should move backwards to, like the dog walkign backwards and placing his rear feet on something like a rolled up carpet, towel, or a board. Sometimes I have used gates to help a dog walk backwards in a straight line, or I have trained while using a wall on one side to help in getting the dog straight while going back. At times I have reinforced all motion away from me and at the point of the last step I wanted to reinforce, I did not let the dog come forward, but moved quickly to the dog to hand him the treat. Anyway, this time I just decided to mark only straight steps back and reinforce from my hand with Scoop coming to me for the cookie. I counted steps before I clicked, continuing to build till I got up to 5 or 6 steps. At that point I switched to throwing my reinforcement toy or cookie to him. I had to be careful on delivering the reward to him or I got a head turn away from me when he caught the reward. Since I would really like him to go straight back and not curl or turn, I want to reward him while he is in straight line directly in front of me.

This is still a work in progress. Sometimes he sort of hops backwards on the first few steps. I want him to go quickly but take steps not jump backwards. I like to teach this behavior as it uses the dog’s rear end rather well and is a good athletic endeavor. I am not trying to strengthen his rear, or build muscle, I won’t do enough of it to do that yet. But as he grows older I will use it for strengthening, and it will probably be part of my warm up drill before I go into the ring.

I have lots more stuff to write about with Scoops’ training, and I hope I will have time to do it in a much more timely fashion rather than waiting 6 weeks to tell you how he’s doing. On my list: toy control games, recalls, using high value toys that put my dog over the top, and lots more.

I have three more days of agility coming up this weekend and Scoop will be with me . I hope my show report on Monday is that his greeting manners have made a remarkable improvement! I hope you have as great a weekend with your puppy as I am planning on having with mine.

← Workshop report (previous entry)
(next entry) Recalls to side →
Comments