this entry has 3 Comments/ in Play, Socializing, Uncategorized / by Nancy Gyes
June 10, 2009

That header may not accurately describe the creativity sessions I have with my puppy. I am not shaping anything, expecting anything or training anything. I am just spending some time sitting on the floor in the kitchen or my office, or out in the agility field. I make sure there are some toys available, or just some stuff, like water bowls or boxes. And then I just watch him play. I engage only as much as he wants, he comes crashing in to sit on my lap, or bring me some stuff and he cuddles or tugs. Or we just “hang”. It is 10:30 at night and I just sat and watched him go cracker dog in my office for 10 minutes. My office isn’t large but he did the butt run, and carried and threw around a metal bowl and a henrietta chicken toy. He squeezed under the shelfs and drug out some empty boxes which he proceeded to jump on and push around and generally just had a good party with. And then he crashed. Sound asleep in 10 seconds after hitting the floor.

I like spending some time every day with no goals, nothing to accomplish. Just see what he wants to do and spend hang out time with him.  He is fun to be with and he is a time thief.

I want to train the fun stuff, but am trying to focus on recalls and playing and really necessary puppy stuff. I put him on the grooming table every day and do little cc stuff with handling and brushes and the drommel. He has a tendency to put up a bit of a fuss about grooming and handling and I don’t want that to be an issue of course. After many training sessions he has stopped biting at the brush, and stands nicely for handling and grooming. I need a helper to do his nails with the drommel. I could force the issue but I don’t need to. If Jim feeds him cookies I can do all his toes pretty quickly without a problem. On my own while he is on the table I pick up a foot, treat, handle each toe, treat, touch a toe with a drommel, treat etc. I feed him for not reacting to me picking up the foot or touching his toes. If he fusses I stop, but no cookie. I do less the next time and praise and treat him for being compliant. I like to keep the treat bowl where he can see it, but not reach it. This works for him, but could be too distracting for some dogs.

I was in Oregon at Robert and Lisa Michelons teaching over the last weekend. It was my second voyage in the RV and so much fun staying at their beautiful home, parked out in a lovely grass yard with views of the mountains. 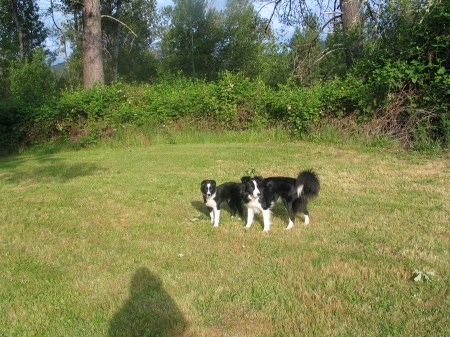 Ace and Scoop had a great time. I really used my treat and train a lot. Scoop stayed in an expen part of the time by the RV and I put the machine in the pen with him. I could reward him from the agility field where I was teaching, what fun for both of us.

He spent much of the last two days with us at the seminar, hangin 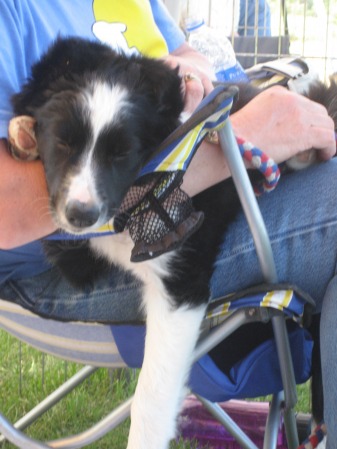 g out with his new friend, Cheryle Davis. She took him for walks, and let him socialize with some of the other pups, and of course let him have afternoon siestas on her lap. On two evenings we went into town for dinner and Scoop came along so that I could get him into the city for some socializing. One of the restaurants was right on the Rogue River, and was a bustling tourist area. The boats were on the river, and the kids were out with skate boards. Lisa Robert and I had a table on the deck, so as soon as we ordered our dinner I nicked off to get Scoop and had a walk that took us through the patios and dinner areas. He got to see waterfalls, lots of people, and walk up and down 100 steps. His first impressions were just slightly worried about all the goings on. I walked briskly with him, giving some cookies and encouraging him to tug on the leash. I put him back in the car while we ate, then got him back out again for another trip around the area. The second time he was great! Tugging, playing, wanting to jump on the rocks in the landscaped areas and walk through the water in the fountains. I am going to remember this two step process the next time we go somewhere he might think is a bit noisy or stressful. Make the first pass fast and fun and then leave. Go back a second time for longer strolls and focusing on what is in the environment.

Scoop and Ace got a bit crazy digging in mole holes one evening at the Michelons. I was wondering what Scoop would look like as a tri and now I k 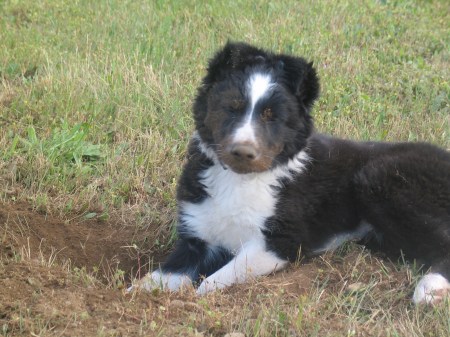 Time for bed for both of us. I am home for a week now and hope to spend some time writing more about our adventures and training this next week. I love my silly, wild, pushy, cuddly pup, hope you love yours too.