here’s the scoop on Scoop

this entry has 9 Comments/ in Aspergillis, Exercising, health, Training / by Nancy Gyes
September 24, 2011

We have been in a training doldrum, his physical health still a big question mark. A month ago I wrote that I thought we were ready to really start working hard, but the last few weeks have left me with even less confidence on his health. I haven’t felt that he was sound enough to really work. But today I am happy to write about Scoop.

For the first time in well over 6 months I had a great jump training session with Scoop last night. We were just fooling around on a small setup I used for a workshop yesterday. I heard a tick or two of bars but for the most part Scoop looked great jumping. He could collect, he did his serps just like he used to do, and he could threadle without crashing into the wings of the jumps. He drove down the closing  lines with no added steps and flew over the last jump in each sequence. We had so much fun and his jump style looked soft and round and not at all uncomfortable. I didn’t want to stop we were having so much fun. I was almost afraid to go to the field today, worried he wouldn’t be the same. But tonight I went out for a short jumping and aframe session  and he was great on all of it. Yeah for us.

Weeks before Scoop’s fungus was diagnosed back in May, he was starting to have all sorts of jumping and contact issues. I knew it wasn’t just behavior, it was physical. Why would a dog who was seeming to progress at a steady pace in his training suddenly totally backslide.  In the middle of trying to find the solution from vets, and therapists, up popped the fungus which I then hoped was the real issue since we were stuck with it and that was a REAL diagnosis. Scoop has been recovering from the fungus just fine, but the physical issues and his jump style were totally changed. I felt like he was broken but no one found anything drastically wrong with him.

The past week, which was no different from many, he was seen by two of my vets, two times each. He had needles twice, once with electricity applied, he got adjusted and poked and prodded and worked on in the lower back and pelvic area. He seemed tight and maybe a bit off in his pelvic region, but not enough to account for his continued crappy jumping. In desperation I contacted my human massage therapist that has never worked on dogs before. He agreed to see him and we had two sessions this week and another one is scheduled for a couple days from now. He found all sorts of pain in his upper thighs, old scar tissue in the muscle and lots of muscle adhesions which need to get worked out. Do I have a new dog? I guess only time will tell. I do think I have more of a real diagnosis and hopefully also a way to reach the heart of the problem. The massage therapy along with acupuncture and adjustments I hope will put us on the right track this time. 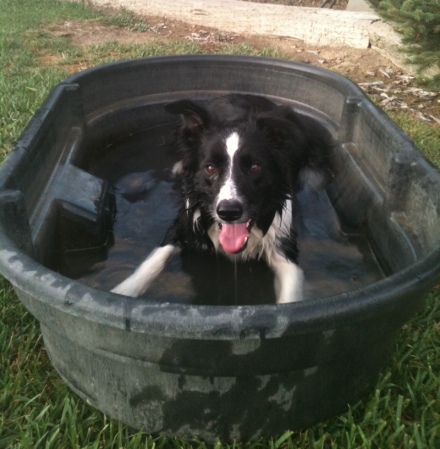 I love my dog. He seems to love me and love training. He has the best feet, a handsome head, and a silly streak a mile long. He is a talker and a cuddler. He has some of the nicest qualities of any dog I have had and so far he loves all people and all dogs! After training he will send to the dog bathtub and totally immerse himself and stay there calmly cooling off, but he is not obsessed with the water like many dogs I have owned. He loves to swim and will stay in the pool exercising, carrying his toy, but he does not bite the water or intake gallons, a big no no if you want to exercise your dog in a pool daily. He seems toy crazed, but is totally controllable around toys. He carries a toy in his mouth on every walk, and never interferes with the other dogs. He is quick twitch when it comes to behaviors. He takes positions fast, and he is not stalky. His stays seem to be great (now:)) He is in many ways a trained agility dog. We should be in the ring competing with all his siblings!

Will we back there soon? Time will tell.

I hope you and your young dog are well on the road to success and earning lots of ribbons in the agility ring and I equally hope that I am just a step behind you.

A note about my massage therapist. This is the same therapist that totally cured my plantar fasciitis some months ago. I had two intensive massages of my feet to knock down all the tightness and muscle adhesions. Those first sessions lasted two hours each but at the end I was pain-free and remain so. He is a miracle worker and I will never again believe that plantar fasciitis isn’t totally curable with therapy instead of the incorrect stretching I was doing along with trying all sort of gimmicks and orthotics which created even more pain. He is in San Jose and if you want his contact info, for yourself or your dog, write me directly at powerpaws@aol.com.

9 Responses to here’s the scoop on Scoop