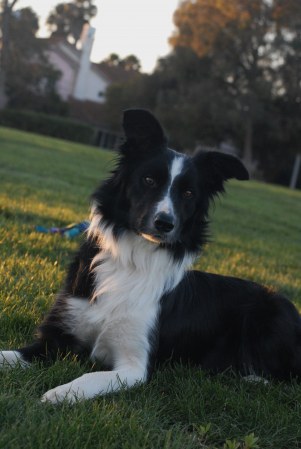 I can’t believe the first couple weeks of 2011 are already behind us. The month has been crazy busy. Christmas travel, then a three day AKC show on New Years, then a great seminar in Santa Barbara last weekend. And all my extra minutes filled in with training Scoop, walking dogs and working on finishing (finally) the Alphabet Drill Book. The photos are done, the cover art is complete and looks super cool, and we are in the proofing stage. Stay tuned for upcoming details on purchasing your copy from Clean Run Publications. 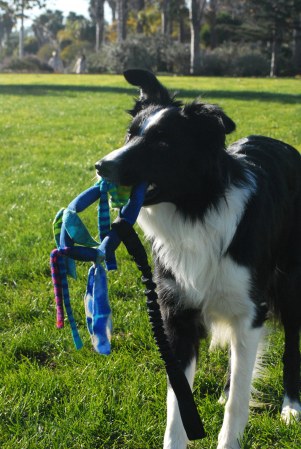 Scoop has been a good boy the last few weeks. A month ago I had never done more than a couple obstacles prior to a contact or weaves, and rarely did any after them without stopping for a retrieve and tug game.  I had certainly not tried doing something like a circle of contacts and jumps without stopping to reward each one. A week before the New Years trial I set up a novice contact course and it took a few tries before he could go directly to another contact with a couple jumps in between. He was waiting for the reward and when I tried to send him on instead he would  sometimes run around the next obstacle in anticipation of a toy toss. After a couple sessions of jump, jump, DW, jump, tunnel, teeter, jump, jump, frame he got the picture and happily moved between obstacles.

We have gone far beyond those beginning steps now and I feel somewhat confident that he is going to take the obstacles in his path. I think something has finally clicked in Scoop’s brain about weaving, and he is happily diving into the weaves accurately and with some of the speed I know he has in him. His footwork can be funky sometimes, but I have decided to let it be what it wants to be. I will be happy with enthusiasm, speed and accuracy.

At the New Years show I entered only  jumpers and the FAST class in the trial. I didn’t want to risk doing contacts in a trial without being able to fix a problem should one come up. Scoop was great in jumpers, we got a refusal in one of the three runs, but the other two were clean and fast and fun for both of us. On the second day of the trial we had a fund raising match after the event to benefit the AKC World Team, and I entered 7 times! Actually I entered Scoop 5 times and Ace 2 times, but Scoop and I were having so much fun on our one minute training sessions, that I took Ace’s turns for Scoop as well.

I had Scoop in a crate with me at ringside while I worked the gate. I would go in for our timed one minute on the course and do a set of weaves and reward with a toy toss and game of tug, then a couple more obstacles then the weaves, etc. We did the full novice jumpers course one time and spent the rest of our novice jww runs, rewarding starts, leadouts and weaves. Then we had a few runs in the agility ring and I got to do all the contacts of course, and stop and play after each one, then began to combine themto play real agility. It was just about the most valuable 7 minutes of training that I have ever done with Scoop. He had to wait patiently between each of his runs during the match, then release fast from the crate, get right to work quickly so we could get the most bang for our one minute bucks! I was tired, he was tired, and we had a great time. He played intensely with me, stayed on the start line, did his DW and Teeter with nose touches and ran all the frames accurately. And he did all the weaves perfect too. A good night’s rest was had by all. 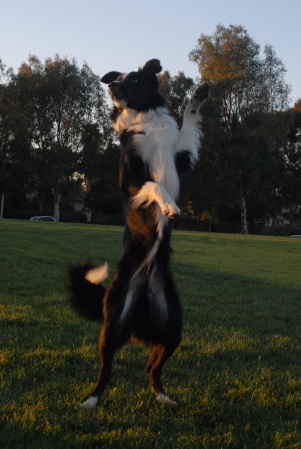 I am leaving in a couple days for a 4 day AKC show in Portland. Indoors, on rubber mats, at a huge breed, obedience, & agility show. Buoyed by my success with Scoop at the last trial I decided to enter him in the standard classes as well as jumpers.  I am nervous about the prospects and have been training a lot, even in the driving rain if need be, and I have my fingers crossed that the show will go well. I don’t care about Q’s, I will be happy to have Scoop react well to the exciting new environment, run with confidence on the rubber mats, and that he remembers most of what he has been trained to do. I don’t expect perfection even though I hope we get it:) I have some new videos of Scoop’s frames and some of our course work I hope to put up before we leave  if I get some extra time between work and training.

Thanks to photog Mia Grant using Kristi Cetrulo’s fancy camera, for the great shots of Scoop from Santa Barbara last week! And thanks to all of you for coming back to read my sporadic meanderings about Scoop’s exploits. I wish you the most wonderful of competition adventures with your novice dog this year, I know I am looking forward to each and every one of mine.