An absence of sadness…..

Ace and I came home two days ago from the European Open which was held in Austria. The adventure had a rocky start with plane cancellations and a couple rescheduled flights, but after day one the entire journey totally rocked. Channan Fosty, Susan Cochran, Laura Jones and myself spent 3 days prior to the event in the beautiful area that is called Salzkammergut, a lake region in Austria in the area of Salzburg. 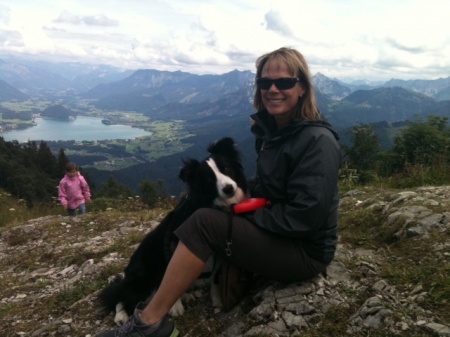 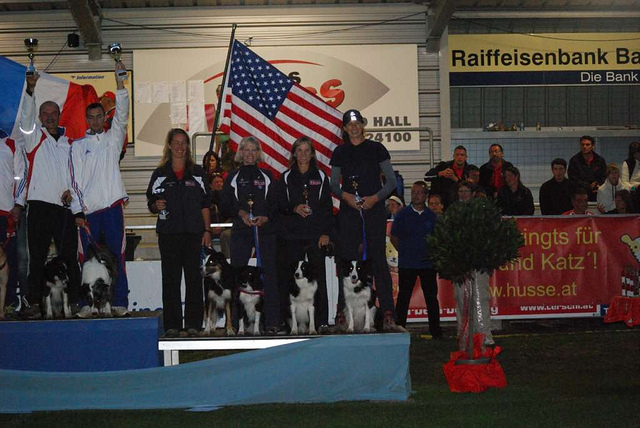 We hiked, ate, explored, ate, played tourist and then ate some more. It was so fitting that we were together in our travels as well as competing on Team USA 1, one of 4 large dogs teams (of 3 or 4 handlers and dogs) competing at the EO for the USA. Our team went into the Team Relay finals in third place, and while we did not medal from our team run, we still got to visit the podium for our trophies for our overall 3rd place team scores which was a real bonus. Our team was one of only 10 teams to make finals and the only US team to do so.

The actual team winners were the three teams which made it through the incredible relay course designed by Judge Gabi Steppan. Finland rocked the audience with 4 clean runs in the Relay with a team of 3 “pups” and their Dam. How cool was that?

The European Open is a really interesting event in that they include each country in the individual finals. You can get into finals with a class placement, or you can be one of your countries top dogs. Daisy got there through a placement, and Ace and I were the top US large dog. There were only 2 large USA dogs in Individual Finals, Daisy Peel with Solar and Ace and myself. Ace and I finished in 7th place, barely 1.5 seconds off the winning time. I have not seen the run on video, I don’t know anyone who filmed it.:( The Finals was held on Saturday night in a driving rain storm and most folks were huddled under umbrellas trying to stay dry. It would not be the EO without a little bit of weather challenge. We had perfect weather every day that week other than for the four hours on Saturday night for the finals.

I have been to 4 European Open events and Ace made finals each of the 4 years. This is the first year they have had a finals for Team. The winner is usually based on cumulative scores over the jumpers and standard rounds. The first year in Italy I fell down in the finals which were held in a sand arena and I found a deep bog and was down on my butt. I usually do pretty well in final rounds but that was certainly not one of my better moments. I can’t remember what place I had three years ago in Germany, but two years ago in Holland I got to the Podium and took home a bronze medal. I would have loved to repeat or better that finish, but I am not at all disappointed with what we accomplished. For a little dog that is not a speed demon, and who spends most of the year jumping 22 inches, finishing in 7th at what I think is the most competitive international event in the world is a huge honor. There were about 350 large dogs at EO jumping 26. Many of the same faces we will see in two months at World Championships were competing, and the class is twice as large as the WC with almost as many countries participating.

I have been going to International and National agility events since 1993. I have been lucky and had lots of high placements, but I have had my share of failures as well. The days following some of those wins and huge successes I used to describe my mental demeanor as being an “absence of sadness”. I often had a big letdown after a huge success, and I would not have described my attitude as being totally happy. I was simply happy that I wasn’t sad! Happy that I had not failed. I wanted too much not to fail as opposed to wanting to do the best I could. I wanted the wins a lot, but my focus was on “not losing.” For a while “not losing” helped me win. I threw everything I had at the finals runs, I would rather have bombed than lost, but the feeling afterwards wasn’t as joyous as it could have been. I hope that attitude is long behind me. I want to give it all I have when I am lucky enough to make a finals run, but I won’t commit hari kari the next day if I don’t win, and if I do win, I am damn well gonna enjoy it!

I am really happy this week. I was thrilled to be the only US handler to make both Individual and Team finals this year! My little dog did all he could do for me, and we didn’t have any huge errors or E’s. And I am happy that I kept a good attitude before during and after the event. I was excited and a little bit nervous prior to runs, but I could still breathe and smile and play with my dog and make small talk with friends while still staying connected and focused on the job.

The mental game that I talk to students and members of the World Team about I hope I am actually living and practicing and reaping the benefits from. Reading books, and articles and blogs on the subject has changed me over the years. I hope it will help me continue to help my students and those I coach as well.

I am happy this week that I don’t just feel an “absence of sadness”. This was probably 8 year old Ace’s last year at the EO and I want to enjoy all my lovely thoughts about the great experience we just had.

Scoop, well, just isn’t ready for me to consider International competitions yet. I sure hope that I have those goals to look forward to with him when I feel like he is really healthy and I can trust that setting a goal to go to Europe and get on a podium with him is actually achievable. I am training Scoop every day I am home, but I know he still has this creepy fungus growing in his head and I am sure it is affecting how he works for me which is really not 100% right now.

Tonight he was a good boy though and I am looking forward to being home the rest of this month to train him, after I get back from a weekend seminar. My happy thoughts and I are headed tomorrow morning to Portland to teach for the weekend. And today was a good day. I had some of my favorite students for classes, and I opened a box from Clean Run that held my Alphabet Drills book. Yeah!!! This was definitely NOT an absence of sadness day!

I hope all your happy days are really happy and that your pup dog is well on his or her way to helping you achieve all your dreams and goals. Mine have already done so for me!

7 Responses to An absence of sadness…..