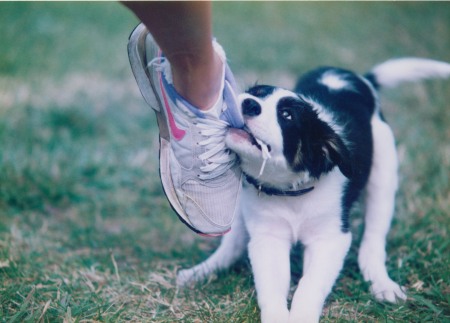 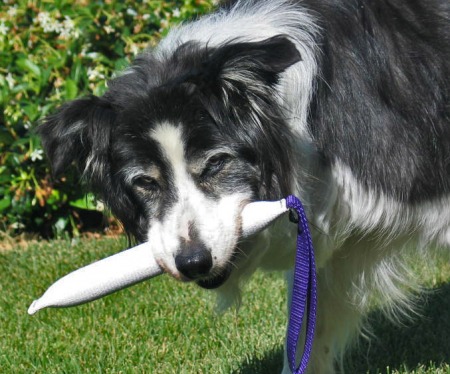 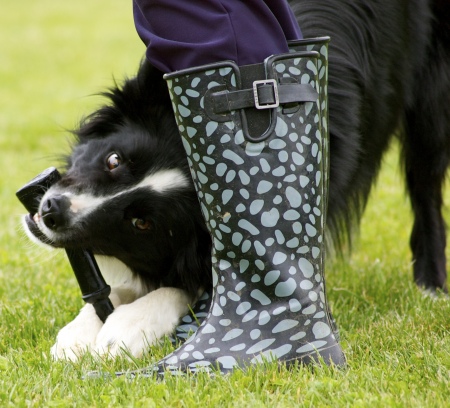 Scoop and Ace and I were in Southern Oregon last weekend teaching at Lisa and Robert Michelon’s agility training center for three days. I parked my RV right next to the training yard and had a really great weekend hanging out with my dogs. Yeah I guess I worked for three days, but teaching friends and long time acquaintances in a beautiful environment does not really feel like work until you are done and tired to the bone. I got some nice photos afterwards, especially of Scoop and my new blue boots:) Thank you Dawn for the Blue Boots and Scoop photo, I love it!

The weather in Oregon in June is more likely to be 100 than it is to be cold and rainy, but we got lucky and hit the middle of the temperature range, a perfect 70 degrees most of the time, and since I am a weather wimp, it was totally absolutely perfect. Is there a place on the planet that has 70 degree weather all year round without humidity and still has sun much of the time? Do they need to have an agility instructor there? Exactly 7 minutes before the seminar was to end Sunday the sky opened and the rain came down in buckets. We all jumped in our cars and were out a there. Well since I am a driving wimp too I only made it three hours to a really nice RV park during daylight so the boys and I could go for a nice long walk along the river in Red Bluff before we hit the sack.

Scoop has ‘snurfled” less every day since his procedure so he got to help out by being a demo dog some of the time. He is so much better that I am totally optimistic that we are on the downside of this disease. His doctor is optimistic and thinks we must have a good combination of drugs for him to be doing so well. I am relieved and happy yet still anxious about the outcome.

Scoop is a really great demo dog. All my dogs have to work for a living, I teach agility and so do they. Some of my dogs have been or are better than others. My first border collie Scud was a great working dog until the demo ended and I started to talk, then he grabbed his toy and dumped it in the nearest handlers lap and of course unless I threatened their expulsion if they played with him, they would happily toss the toy and I would yell for him to come back and lie down and he would till the next moment my back was turned and then the toy/lap/toss/yell thing started all over again. Oh my!

Riot was the best demo dog I ever had and a great helper too. She never interfered with any handler or dog but she loved to watch. She would demo a drill, lie down with her toy, then when a handler went to the line with their dog she would sneak up behind and after the handler dropped the leash she would pick it up and watch the dog run and then deliver it to the finish line where the handler would have to ask Riot for the leash. She would always oblige then silently creep over behind the next dog to run and repeat the scenario. No dog ever gave her the evil eye, or cared that she was watching and taking their leash. She has dog instinct and manners and never took a dogs leash until they left the line. She was my all time perfect working assistant while I taught, and of course great entertainment for all.

Wicked was too silly to demo. She is the sweetest dog there ever was but unless you were actually running her in agility (which she would do with anyone) she could not focus on the job of demoing a little exercise. She was just too silly and would jump around playing with the toy and maybe do what I asked her to do, maybe not. Stage fright? I dunno. Panic was a darn good demo dog, he loved to work but would also chill on the sidelines while he waited for another turn. He was a bit too fast and frantic at times, but he tried as hard as any dog ever could when the reward was to get to do agility.

Ace is not a really happy demo dog. I cannot speak to anyone or talk at all while he is working. He can do anything in agility if he is thinks he is on a course, or he and I are doing a drill on our own, but he is suspicious when I talk to people after or during his working times. It is like he is saying “if we are working why are you looking at them and saying things I don’t understand? Am I doing something wrong, what are you saying? Why are you talking about something we did, while you are playing with me? This is too weird, I can’t work if you are talking to ghosts”.

Scoop worked at a foundation seminar when he was just a few months old. He coped with the audience, the distractions, and the job of doing one thing and being rewarded then sent to a crate to hang out til the next opportunity to work. Somewhere around 5 months old demoing in a class situation became pretty difficult, and not because of the difficulty of the foundation exercise, but that he was too excited after the drill to settle quietly. He would scream when watching other dogs work. When he was older self control started to kick in and he learned to wait quietly for a turn.

Scoop will lie at my feet for the most part, or in his open crate and is not at all naughty unless I am helping a handler perk up their dog with a restrained recall. Scoop will occasionally without invitation join me to “help”. That’s ok, I don’t mind the occasional naughtiness, I am not perfect and neither is he:) 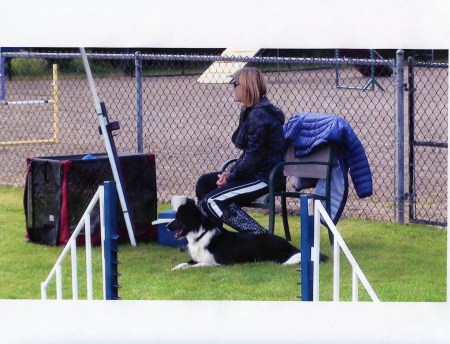 I hope you have a dog that can be by your side while you teach, or accompany you to your workplace and hang out politely. If you have to go to work, always best to do so with a dog by your side.