this entry has 0 Comments/ in Uncategorized / by Nancy Gyes
January 3, 2010 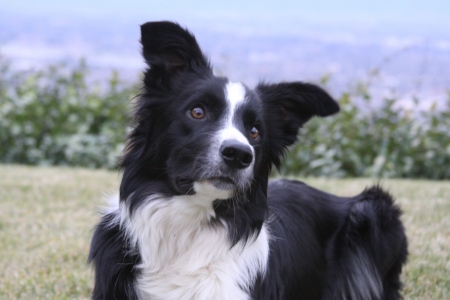 After I wrote the title to this post I thought the word cuttin’ looked a bit funny, so I did what I do so many times a day when I am at my computer, I googled cuttin bait, not cutting bait. I got to read about a cool guy named Rodney who was a fisherman that died, and for some reason google led me to him. I may donate to his charity even though I haven’t a clue who he is.  He seemed like a really great guy, and he fished and lots of people loved him. The charity is Take A Kid Fishing Foundation and since I have so many great memories of fishing with my Dad, maybe that is what I am supposed to do today. Sometimes I hate the internet, today I like it, and I always love google.

I really just wanted to write about the time it takes to cut up training cookies for Scoop. I never cut up more than I need for a short session. I like to cut some treats from leftover meat, or  some chicken I cooked just for him , or I chop my little meatball bites in thirds. I use Deli Fresh Pet bites really often when I train. They are a healthy alternative to doggie junk food and if I don’t feed anything other than training treats all day, I know that my dog is getting a very healthy diet. http://www.delifreshpet.com/products/bites.htm

I like to train for a few minutes, maybe longer, then take a break, think about what we did, ask myself Bob Bailey’s famous post training question, Am I better off now than when I started? while I am cuttin’ bait. Then I go back to train again and hopefully the thought process was as productive as the treat cutting. Today I thought the answer was yes, so I proceeded to train some more. Somtimes I don’t feel like cuttin bait at all, and we just train with toys. After the treat session I played with Scoop till my back hurt tugging with him. Three steps heelwork, release to tug, 10 steps then tug, then down the hallway, with a left about turn at each doorway, and more tugging after we made it through to the living room in perfect heel position with eyes on me. Whew!

Long live resolutions! I did eveything today that I wanted to with Scoop during training. We had a really nice groundwork session running circles and straight lines and he was right there with me till he wasn’t:) He went a bit wide on the right side, (I am a left side obedience girl and I know I favor the left) so I did little side passes that I learned when I used to ride dressage with my horses. He tightened right up when I reminded him where he was supposd to be by marking him almost crashing into my right leg with his enthusiasm.

Scoop got a bit o.t.t. when we were doing groundwork today. The mouth was open,  (his not mine) and I know if I hadn’t shoved something in it (toy) when he was screaming  that the moment would have deteriorated as I cried uncle don’t you dare bite me in your enthusiasm to do this heelwork I am the boss of you mister came out of my mouth, then the brain (mine not his) took over and I switched to treats and calmed down myself a bit while playing and as  the play level dropped down a notch we were back on track to having fun but not so much fun that Scoop ate my leg.

This is the last day of my Christmas holiday, then it is back to work and travel. I don’t want to leave my dogs but someone has to pay for that expensive bait, and the internet connection, and the donation to the fishing kids organization.

Hope you had a great holiday and lots of fun training sessions with your pup, I know I did with mine!