one thing leads to another

this entry has 1 Comment/ in contacts, Training, Uncategorized, When to train / by Nancy Gyes
January 25, 2010

It started with 5 border collies and a potential short walk round the field. How it ended was not how it was planned. It took lots longer than planned to get to the field because everyone has to wait for a release through all the gates, and we had a couple anxious dogs who did not want to wait for releases, so we trained gate behavior for a while. Finally into the field, and as long as we were there anyway, why not  head down to the pond.

An hour later, 5 tired wet and muddy dogs needed to get dried off. Why not put them in the dog tub first, and get the mud off their legs, and as long as they were there, might as well, give em a full bath, and while they were getting dried on the grooming table why not do their nails. It is now time to feed dinner, so we might as well stay in the dog room and feed, then clean all the bowls, and fill up the weeks’ pill container for Panic and Riot’s pills and of course noticing we were low on a prescription it was into the office and call for a script refill.

This mornings training with Scoop felt the same way. How about a few minutes of target training in 2o2o on the little contact training box thingy in the living room. We started with nose touches to a target while he was in 2o2o on the box. Lots of cookie rewards and then a game of tug in between nose touches. Then on to nose touches with a release and toy throw, then a little bit of sloppiness on the target before  the release to the toy and we are back to multiple nose touching for cookies in place on the box. I tried some tugging in 2o2o position as a reward for the touch and his back feet came off the box. A short session of reinforcing keep your back feet on the board while we tug, and then we went back to try to put it together.

All systems go til Scoop wouldn’t drop the tug  toy on cue when I asked, so we had a session of tug/leave/click/treat/tug/leave/click/tug etc. If Scoop doesn’t relinquish the toy happily and quickly, using it as a reinforcer for the targeting isn’t going to be fun for either of us. Invariably training sessions go where they need to go. I have a starting plan, know what I am going to reinforce and how, but where the training leads me at times is not necessarily where I saw it going when we started. That’s ok. I don’t mind filling in the blanks, and taking a detour when something needs to be reinforced. At the end of  training this morning my disc targeting behaviors were improved. So was Scoop’s understanding that he can keep his back feet on the board and still be able to tug, and the toy release got some needed reinforcement. I usually do that a few times a week anyway, I just didn’t plan on doing it this morning.

Now we had a fun training session that ended with Scoop asking for more and we can head to the field for a walk, and some gate training, or maybe to the swimming pool and maybe a quick brushing…. 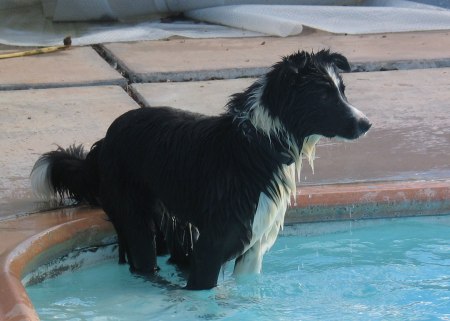 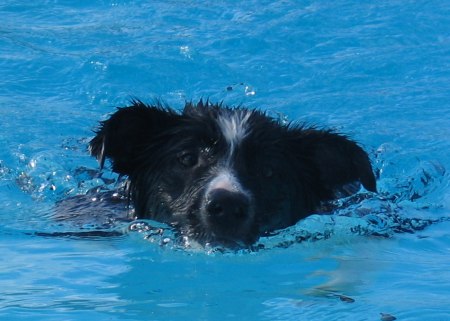 One Response to one thing leads to another