this entry has 0 Comments/ in Uncategorized / by Nancy Gyes
December 16, 2009 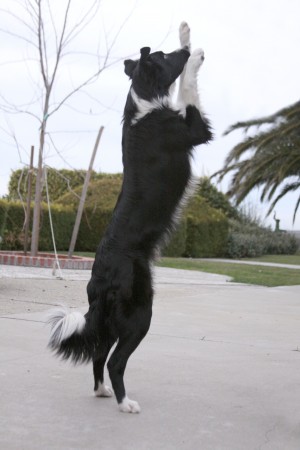 Scoop and I spent much of this past weekend indoors. It was wet and cold, not your average California weather, but pretty typical Northern California winter weather. We don’t get real winters as those who live in the colder climes may claim, but since we don’t have indoor facilities in which to train , I think we have learned to rough it pretty well. Last week during some of our evening classes the thermometer did not reach 35 degrees! Throw in a light breeze and it feels like a real winter to ME!

So Scoop and I worked on  tricks. We trained standing on his hind legs, lying flat on his side, and putting toys into a container.The photos here were taken today, outside of course, by our marvelous photographer Marcy Mantell, it was cold but luckily no rain.

Lie flat on your side 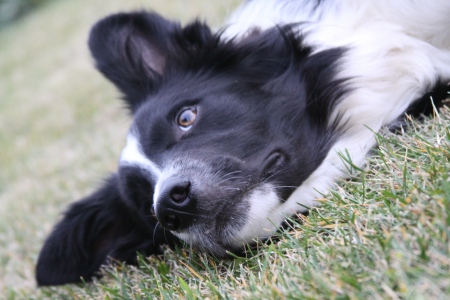 Scoop already knows to drop his head to the ground and hold it there on a drop command, so I decided to take the skill and turn it into having him lie flat on his side, legs straight out, with his head on the ground. It went pretty quick. I gave him the cue for drop, then started to reinforce him turning his head  just slightly to the side. He figured out pretty quickly to offer to lie down and drop his head, so I stopped using the drop command to get it started. I don’t want to lose that separate skill.  I went on to shape his head turning to the side while he was lying down, and then waited for his hips to follow while he rolled to his side. The roll of the hips was the turning point in getting the full behavior to happen. I did make a mistake in starting to reward duration too quickly before I got him throwing himself on the ground to lie flat.  I stopped rewarding any duration in position flat on his side, and just clicked and reinforced him for getting into the position fast. As soon as he was fully on his side I used his release word of break, and then started over getting him to move from a standing position all the way into flat on his side. I didn’t want him to lie down…then drop his head…then roll to a side position. I wanted it all in one piece.

I muddied the waters a bit by being slow to click a couple times when he was fully flat, and he turned the behavior into a full roll over, which I haven’t taught yet. But now that I he will lie prone with his head down (drop), lie on his side  (flat), I can easily move to a full roll over, or just a half roll over (show me your belly) which is a great skill to have for body exams and grooming.

Put your toys away 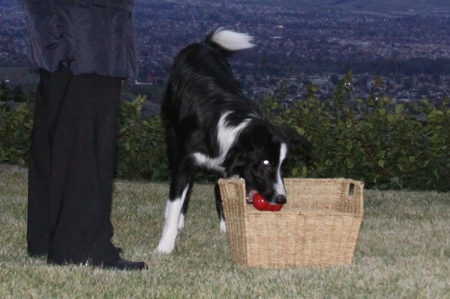 In between sessions of flatwork, I trained Scoop to put a toy in a box. I sat on the ground with a box that was about a foot square, but only a few inches high. The box was on the floor, but right in my lap where Scoop would normally bring the retrieve toy. I threw Scoops’ toy a couple feet from me, and when he brought it back I held my hand out over the box and then clicked as he was getting ready to put it in my hand. He dropped the toy to get the cookie and the toy ended up in the box as I did not catch it but let it fall inside the box.

The only thing that slowed the progress of this training was that the little rubber retrieve toy kept getting juice from his treats on it, and Scoop would occasionally mouth the toy rather than picking it up quickly and returning it. As he dropped the toy in the box, I would click and treat, and the juicy treats from both his mouth and my hand got on the toy, and that was interfering with fast retrieves. I switched to hard treats which made his mouth drier, but took a second or two longer for him to swallow. Oh well, it can’t all be perfect.

I was trying to get lots of short retrieves to the box very fast, basically just placing the toy on the ground within a couple feet of us and having him retrieve from there.  Then I started to move the box away from my lap. I placed myself to the right or left of the box so it was on my side, so Scoop started to understand it is all about putting the toy in the box, not just about bringing it to my front and dropping in a timely fashion. In one of the sessions Scoop really got that it was about placing the toy in a receptacle. He focused on looking for the box, and then looked at the toy after dropping it in. I think he said… wow, that was cool:) I have now traded out the low box for the one in the photo and was able to move to a standing position next to the box. Hopefully in a couple days we will be able to play put away your toys and move on to multiples. 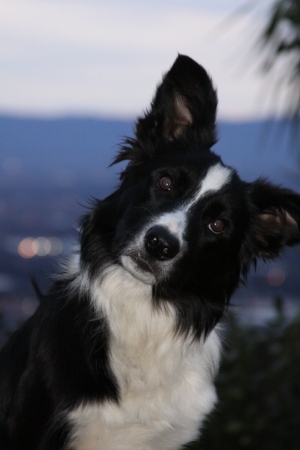 Scoop and I are headed out to train some more before I teach a class. I hope you are having as much fun as I am teaching tricks to your puppy.