this entry has 0 Comments/ in Uncategorized / by Nancy Gyes
September 2, 2010

When Scoop was about 13 months old I started working him in some of the agility classes which I teach. At that time his drills consisted of just 2 or 3 obstacles, then stop and tug, then maybe do another obstable or two before ending his shortened version of the class drill. When he was much younger it was impossible to have him with me when I taught class. He screamed and barked and was generally obnoxious unless I was shoveling cheese in his mouth. He looks pretty grown up now while he sits quietly in his soft cage with the door open waiting for his turn. 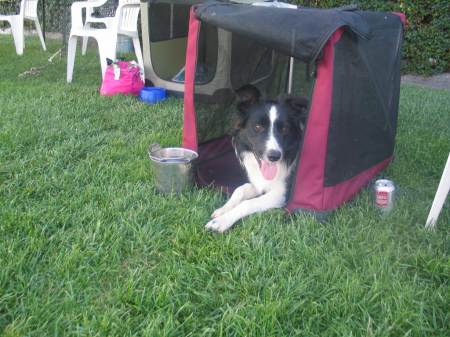 I usually get him out to play multiple times while students are walking exercises and then pop him back in his cage again to wait for his short turn. At one end of our agility field we have a big metal cage that came from a laboratory, I always imagine monkeys were housed it in at one time, but now it is Scoop’s home away from home. 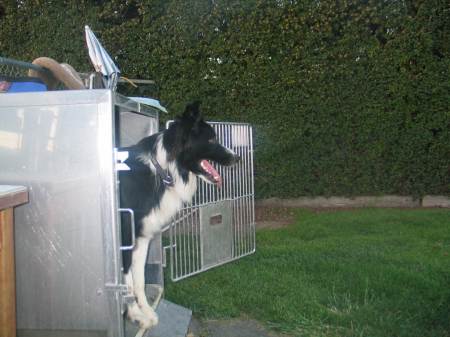 I have always worked my dogs in classes which I teach here at power paws. Since I often have limited time to train on my own, this is my solution to getting in the extra practice time. Also, my dogs are probably just like everyone elses in that during a quiet practice time here in the yard, they make few mistakes and I don’t push myself to really run hard in each drill. In classes my dogs start lines, contacts, and level of attention gets proofed all the time.

Scoop can do almost all the jumping drills now with any level of class. He is not on straight line weaves yet, but if there are weaves in the exercise I ask him to enter and he often does find the entry and do the first 6 in a straight line without too much problem. Beyond that he will often just skip out of the poles and I just go on as if he did them all correctly. I hope his weaves are perfected soon, but for now they are still a working project. I haven’t counted the days of consistent weave training with him, but I do know he is taking longer than the couple weeks that my dogs normally take to perfect the poles. Maybe it is all that leg he’s got, or that he just doesn’t want them bad enough, but whatever the reason, he is still not consistent in his footwork. I am rethinking about how soon I will get to show Scoop in a trial. I could do AKC with 6 poles in novice jumpers, or USDAA jumpers with no weaves, but that doesn’t sound like as much fun as sending in a complete entry will be, so I may just wait till his weaves and contacts are all done.

I got a new photo app for my iphone called Hipstamatic. Last weekend at the USDAA trial I shot this pic which looks “aged”. He sure looks sweet here. Hope you are having lots of success training your puppy, but more importantly, I hope you are having fun!  NJG 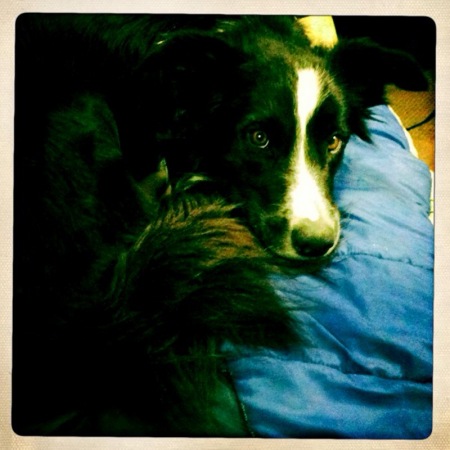 ← when it’s a hundred (previous entry)
(next entry) Momentum →
Comments