this entry has 9 Comments/ in Aspergillis, Exercising, health, Training / by Nancy Gyes
August 21, 2011

Scoobie went in to get scoped a couple days ago and had another treament for Aspergillis. He also got his hips and head radiographed. The head shot was to see if the fungus had traveled further up into his head. GREAT NEWS! On scoping there was no visual sign of the fungal growth in his nose, and the radiograph showed that it has not traveled into his head.

Scoop’s internist decided to do another treatment even though the fungus was not visible.  A dog’s nasal area looks like folds in a piece of fabric, with all these little hills and valleys and tunnels. The nasty little fungus could have been hiding in one of those little crevasses. The biggest trauma in the treatment is putting him under anesthesia for a few hours. The actual treatment takes about 90 minutes while they fill up the cavity with fungus poison and then roll him around a few times to make sure the meds get to every surface.

Dr. Helen Hamilton explained that the fungus is really slow growing, and the body does not really try to fight it off. But unfortunately once it takes hold it just moves in like a visit from a bad relative! Scoop is still on two anti-fungal drugs and will remain on them for many more months I suspect.

And more good news; his hips looked really great. How convenient that my orthopod and internist share an office and I could get two procedures done at the same time! He sure seemed to take a long time to wake up, but I am an absolute expert at sitting on my vet’s floor with my dogs for these events. I hate to think how many hours I have spent of my life in those back rooms. 4 years of chemo with Scud, and a long succession of minor and major surgical repairs and fixes and x-rays and so on with all my dogs over the last 25 years  of working with the same vets! 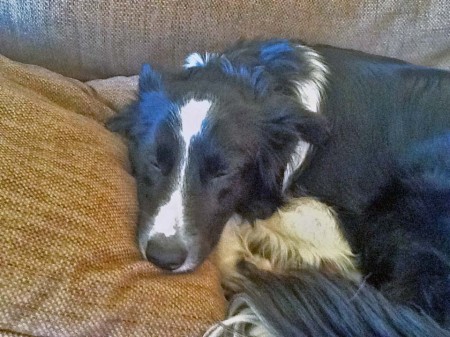 While I have been lightly training Scoop on and off for the past 4 months while we have been dealing with and treating the fungus, it has not been with much conviction or passion. For some weeks before the diagnosis Scoop was just sort of “off”. I was struggling with his A-frame training, he was pulling lots of bars and just plain didn’t look good on jump drills. There were lots of other little signs that he wasn’t right, but until the snurfling started I had no idea what it was. I am hoping that all the discomfort in his head was what was causing a variety of training issues. So, now on to getting this juvenile finished with his training. I have been cutting him lots of slack of course, blaming his behavior or lack of it as the case may be on the fungus. I haven’t pushed him to do very much, not really knowing if he was uncomfortable. BUT, I am on a mission now and hope to have time to share stories about Scoop Training, Take 2.

This morning we started the day with a long walk around the fields. After breakfast we worked bounce jumps, 5 in a row, 22 inch height, 8 foot distance and then I put up a straight grid of 5 jumps at 26 inches, with bumps on the ground in between so that his one stride on the ground in between was even. We did some decel front cross and “flip your hips” training for a few minutes as well. He cooled off with a swim in the pool afterwards and I think looked like he could go do it all again afterwards.

Stay tuned for stories of a new and improved and hopefully trained border collie named Scoop.

I hope you are having a great training weekend with your youngster, I sure am with mine!

← An absence of sadness….. (previous entry)
(next entry) here’s the scoop on Scoop →
Comments