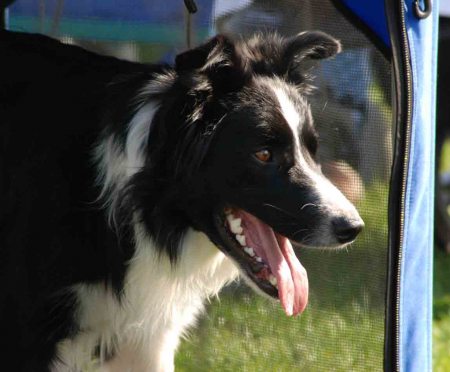 Scoop and I had a great time at the Portland AKC trial. I have been to that show almost every year since 1996, and this was one of the best ever. It is indoors on good matting, the same as the AKC Nationals. The courses were fun, the Time to Beat demo on Saturday night was perfect, allowing the handlers to run as often as they liked for $5. a run for charity. Some of the 2010 World Team Members (and coach:)) were at the event and we offered to run other handlers dog for a further $20. donation to the World Team. Those dogs that were willing to go round the ring with us had a great time as did we!

The weekend ended with ISC jumpers which I obviously do not enter with my dogs because as the World Team Coach I believe it would be inappropriate. However fate stepped in this year. My 7 year old BC Ace tied with a team for first in Excellent JWW and the course was torn down before we could have a run off. The ISC jumpers was offered as an alternative for the runoff and we gladly accepted. We ran at our 20 inch height at the end of the class, and thankfully had a fast and clean run on the challenging ISC course as the very last run of the entire show weekend. The grandstands cheered, and Ace and I had a blast.

Scoop was a pretty good boy. We made our debut in Novice standard and got 2 out of 4 legs. The wheel sort of fell off the last two standard runs. A ticked broad jump, refusal on the teeter, a tunnel off course when I was trying to reset to take the teeter, and a couple more bumbles in there as well.  We did get our third Novice JWW leg and got to move to Open JWW the last day. We had a pretty nice run but pulled a bar. You can watch our run here.

It took Scoop a couple runs to get used to the mats and the indoor trial setting as he has never trained in that environment. My bad, I should have made some trips to work in that kind of setting, but we got lucky anyway and he adjusted to the different footing just fine. He didn’t show as much speed or turning ability as he does on grass, and he added some extra strides I wish he would have left out, but fine for his first experience on mats. The first two days they held the FAST class as well and we qualified both times. So the weekend results were fairly nice for my green green boy. 2 Fast legs, 2 standard legs and a finished title in jumpers over the 4 day event.

Today is a training day. Scoop’s 2o2o behavior on the DW and teeter were pretty funky at the event. He stopped short on both contacts and reached back between his legs and nose touched the board. Two things going on there. First, I think the surface change from wood to rubber was something he thought was odd and he just doesn’t have any reinforcement history on that surface change. And maybe a bigger reason is that last week when running the contacts he was stopping with his feet barely off the board in 2o2o, and when he reached between his legs to nose touch, his nose came back almost to the board and I inadvertently marked that exaggerated behavior. Whoops!!

I am going to do a refresher course this week on 2o2o to remind him how far off the board his feet should be and that he needs to touch straight to the ground not reach back for the board. We already had one session this morning and it went well, but I have the plexi target out and we are just working on proofing on a flat board. I need to get the target away again, and proof on lots of different surfaces. This morning we worked wood to cement. I will drag out a long rubber mat to work on later, and I am going to skip wood to grass training for a couple days.

I am thinking about which alphabet drill to work on today….maybe letter “J”. 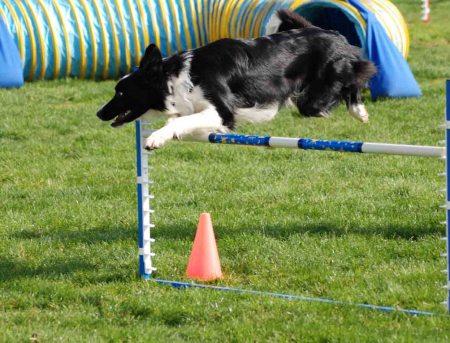 Thank you Mia for sending the nice photos of Jerry Ross from Santa Barbara a couple weeks ago. Can one ever have enough dog photos? Nah!

If you got to run your baby dog at a show on the weekend I hope you had as much fun as I did and that your dog did perfect start lines like Scoop did, and played every time you asked as well. If you accomplished that then the weekend was a successful one.